I have quite a few accomplishments you won’t find on a typical resume. Here are a few:
OAKLAND LEAF. In 2016, I worked under the supervision of Oakland Leaf, bringing creative writing classes to the after-school program at Bret Harte Middle School. Helping the kids write, illustrate, and publish their own chapbook was immensely rewarding, and I’m grateful to have worked with such an awesome group of students and facilitators.
NEAL CASSADY AWARD. In 2015, I was awarded the title of Modern-Day Beat Poet, by the Neal Cassady Estate. To be fair - I enrolled in the competition on a whim, drank one too many whiskeys, flubbed my words, and won by accident. I am still unsure whether this was entirely unfair, or completely appropriate, given the title’s namesake!
EVERYHERE LOGISTICS. In 2015, I partnered with Everyhere Logistics to deliver the Lost Horizons Night Market, an experiential art exhibit. We planned, built, and coordinated a pop-up art installation which included the efforts of more than 20 box trucks, built by 100 independent artists - and traveled more than 5000 miles to inspire and delight audiences nationwide. Read more, here.
LAWRENCE FERLINGHETTI AWARD. In 2014, I was awarded the Barley Rhymes Lawrence Ferlinghetti Award, alongside the honorary moniker of Insurgent Poet. Larry Smith noted in his book Lawrence Ferlinghetti: Poet-at-Large, that L.F. wrote "truly memorable poetry, poems that lodge themselves in the consciousness of the reader and generate awareness and change." This statement accurately describes the aspiration of my work.
FIGMENT OAKLAND. In 2014, I helped organize Figment Oakland - a free, inclusive, participatory arts event. Held in multiple cities, FIGMENT draws tens of thousands of participants each year. We brought this family-friendly event to Oakland for the first time, through a joint effort with Mosswood Park.
I assisted in events coordination and organization, as well as creating my own participatory art project. Read more, here. 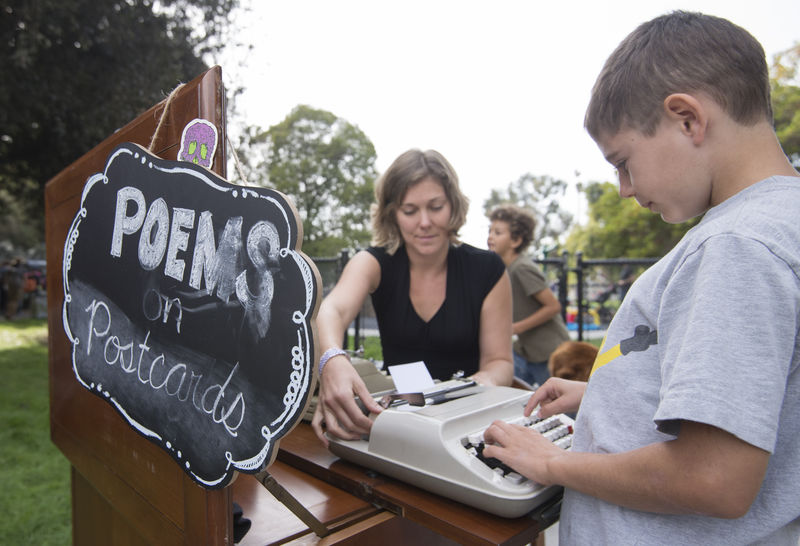 ARTBOX. In 2013, I helped establish the ArtBox Institute - a program designed to teach business skills to independent artists and creatives.
As a member of the original ArtBox Council, I was responsible for outlining and establishing guidelines and methodology for teachers and facilitators, as well as developing foundational curriculum and educational materials, in alignment with organizational goals. I taught a series of courses, including classes on establishing a digital presence, best practices for start-ups, innovative monetization, and creating residual income.
Funded by grants obtained through the National Endowment for the Arts, the ArtBox Program has received ongoing support from both alumni and local government/municipal entities, and is still alive and thriving today.
PARENTING. I’ve successfully raised an entire human being! He’s 23 years old, and lives independently. He loves music, making things with his bare hands, baking cupcakes, and throwing shapes. He works harder than anyone I know, and always has a smile on his face. He’s my favorite person - and he inspires me to be better, every day.
COACHING. I mentor at-risk teens and young adults in need of sympathetic support and positive guidance. Through the framework of spoken-word performance and competitive (slam) poetry, I organize educational workshops and develop relationships which encourage teamwork, build trust, and promote positive expression.
Most of my students have gone on to compete in the National Poetry Slam, Women of the World Competition, and/or IWPS. A few have taken on roles of responsibility within their local communities, taking on the role of mentors themselves - while others have gone on to perform professionally, collaborating with world-renowned artists. All of them make me incredibly proud!
PUBLICATION. My writing has appeared in many journals, newspapers, and digital publications. At this point, the list is long! If you’re interested in my professional work, please view my PROJECTS page, or visit me on LinkedIn. If you’re seeking more poetic endeavors, you can find my creative work at VERBALLISTICS.
For those seeking VERBALLISTICS Magazine, we are no longer in print - however, you can still view a digital copy of our very first issue, here.